Something bad happened to me on 28 July 2000. It’s a day that has never passed in the years since without bringing That Thing That Happened to my mind. I’m glad to report that time has brought a lot of healing and reduced to almost nil the fury of the early anniversaries of the date; STILL, when I chose a release date for my new novella, I thought, Why not take that day back? That miserable pathetic excuse of a man isn’t worth a microgram of your brain space.

The irony, of course, is that my new association with the day will be a novella dealing with the topic of adultery, which carries its own baggage in my brain.

I’m not triggered by a lot of things, but when I am, it’s usually fairly intense. Ordinary, attractive bad guy seeking favours from naive girl? Hard to read. (Hello, Pearl Thief.) Does an animal die? That might actually make me cry. (Hello, Black Beauty and BASICALLY EVERY OTHER BOOK WITH ANIMALS EVER.) Adultery? BARF.

Okay, it’s somewhat dependent. It’s one thing if the infidelity is in the periphery, but if it’s the main part of the plot and we’re supposed to be sympathetic, that is really hard for me to cope with, especially in a book like Letters From Skye where the situation is like an Edwardian carbon copy of a certain family member’s road to disaster. (LFS is beautifully written, by the way, it’s just the content I couldn’t handle. I really only finished it because the reader had a beautiful voice.)

After I wrote The War in Our Hearts and the first edition was published and out, I had multiple people beg for MORE GEORGE. I didn’t really understand that, because George was always the one character I found really annoying and didn’t feel a lot of sympathy for. He’s an unfaithful husband, after all! And I didn’t really want to write about his infidelity or dwell on it much (and honestly, even now that I HAVE written about it and therefore had to give it a lot of thought, it’s still not a fun topic for me).

I’ve titled it RIPPLES, and here is the cover: 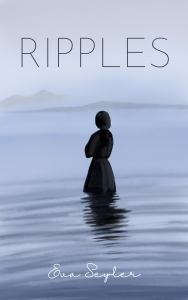 So, you might ask, why did I write about a topic that I don’t find personally appealing? (Cue WORST SALES PITCH EVER???)

Aside from the obvious “people were asking for more George”, it started with my first middle grade manuscript, which I started working on shortly after the original edition of TWIOH came out: a story about George and Alice’s son. That story is set in 1925 and deals with the complete cutting off of George from his previous life in England, the secrets he and Alice have from their son, and how damaging to a family secrets inevitably are (to the son as well as George’s abandoned elder daughters, whose plight is the one that resonates most intensely with me). As I wrote, I got to thinking: How did George get from point A (in TWIOH) to point B (in this manuscript)? He almost doesn’t seem like the same person.

I continued to write about George’s son after I finished that manuscript, and the end result has been that George has grown on me quite a lot, as I have learned to know him more through the eyes of his son and not strictly through his brother Jamie’s (admittedly pretty judge-y) lens. When I re-edited TWIOH last year for re-release, I think I made some small but significant changes to line up better with how his character arc continues beyond the end of that book.

Plus, I ended up writing this novella as a backstory. I wanted to explore the reasons George and Maggie’s marriage didn’t work, as well as understand Alice-who-lives-down-the-street. Was she just a homewrecker? Who initiated the affair? What transformed them into the people they become by the time my middle grade manuscript takes place? I didn’t really have the guts to prod into the abandoned daughters’ situation much. Maybe at some point in the future. There are some things that just hit too close to home, and I think the reader will be able to imagine pretty well what it was like for them without my spelling it out.

(Or else you can hit up AO3 and write some fanfiction of your own to satisfy any leftover cravings for angst; I 100% support fanfiction.)

Finally, you might wonder: Does Ripples interfere in any way with The War in Our Hearts?

It does contain spoilers (including THE Spoiler of Spoilers) for TWIOH. The stories are not dependent on each other at all, however. So if you haven’t read either one, it’s totally up to you as to which you want to read first.

[Note: This post is an expanded, more polished version of yesterday’s email newsletter; if you want to subscribe, click here. I don’t usually cross-post my newsletter content to my blog, but I’m making an exception here since this is a new book announcement.]

On V-E Day, Lilacs, and Being a Hot Mess

WWI Films: THE EAGLE AND THE HAWK