Recently I’ve been re-visiting some classic films (mostly from the 1930s) set in WWI, and I thought I’d make some posts about them here, because it’s been super fascinating to me. I’ve also got a few on my to-watch list that I haven’t actually seen yet, so I’m looking forward to those. 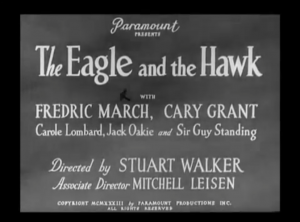 Sometime in the early 2000s, my mother became obsessed with Fredric March (the love of classic films dated back far beyond that). We watched this film I don’t know HOW many times, probably at least a dozen. However often it was, although I hadn’t seen in nearly 20 years, I was nodding along going, “oh yeah, THAT line! And that one! OH YEAH, that’s where this was from!”

I feel like these films influenced me so much and I probably don’t even realise how much, which is definitely going to make re-visiting them extra interesting.

I have a whole new appreciation for the setting that I didn’t have then, that’s for sure. Having listened to two Bigglesworth books immediately prior to this viewing (Biggles Learns to Fly and Biggles of the Camel Squadron), it really brought the atmosphere of a RFC flight squadron to life. Even if it’s faked, it lines up really well with the Biggles narrative, which was based on the author’s own experiences in the war, and this particular film is really more about the emotional backlash of war, with only the action needed to make the point.

This film, and others like it in the 1920s-30s, must have really had both an immediacy and nostalgia/glamour to audiences, depending on the age group taking in the media. The young people would have been fired by the adventure; the ones who’d been there would have been remembering.

Remembering their own experiences, the loss of their comrades, and the pointlessness of it all.

They set me up as a shiny tin god. A hero. An ace! They expect me to act like a hero. So, you can all play at being heroes. So, you can go out and shoot other kids down, burning. Get killed yourselves! They’ll decorate you for it! They’ll give you medals! Just like they did me. I got these for killing kids! They’re all chunks of torn flesh, and broken bones, and blood! And FOR WHAT?

Specifically in regards to this film, some points of interest.

*I’ve been fascinated with shell shock/PTSD for a very long time, and I am pretty sure this film was probably my first exposure to it. It really stuck with me. Fredric March is a brilliant actor, able to pull off the drama without hamming it up. (In case you missed it, I wrote a guest post about shell shock which you can read here.)

*Voss, the German ace they shoot down in this film, was a real pilot, which I had no idea of back when I originally watched this film. You can read more about him here.

Let me know if you’ve seen this film! I’d love to discuss it.

WWI Films: The Road to Glory