And today we have JOHN QUINCY ADAMS. 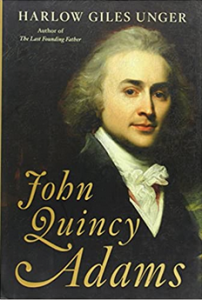 No matter how lousy JQA may have been as a president, I really, REALLY found myself liking him as a person, and in his other official capacities I don’t think anyone would argue he did well. What a life he led! So many countries visited on diplomatic missions, and best of all, NOT A SLAVE-HOLDER. It was really refreshing to me, since all the other presidents thus far have been slave-holders, barring JQA’s father, (who I also found myself liking a lot despite his flaws). I was particularly moved by John Quincy’s determined, active HATRED of slavery and his willingness to speak out against it no matter what. I loved this book a lot and highly recommend it.