Today I’m here to talk about ALL QUIET ON THE WESTERN FRONT, a 1930 film starring Lew Ayres as Paul Baumer, the narrator of the book. 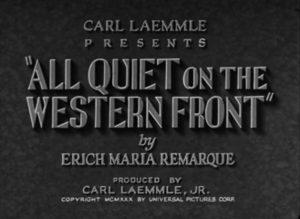 When I first saw this, back in the early 2000s, I had JUST read the book and I was so let down by the film I never wanted to see it again, so I approached it with caution this time. (I really do like Lew Ayres.) 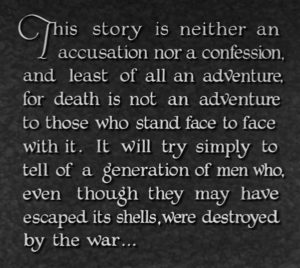 I was pleasantly surprised to find I thoroughly enjoyed it, for a variety of reasons. Yes, there are moments that feel a little stilted (such as when Ayres goes into soliloquy mode to convey stuff that you just can’t otherwise convey in a movie of a book written in first-person [that was a really awkward sentence]), but when you consider this was a very early talkie (and I have seen a LOT of terrible early talkies), you can give it a pass for that. No, it’s not quite as moving as the book, but the filmography is stellar IMO, and Lew Ayres turns in a fantastic performance. 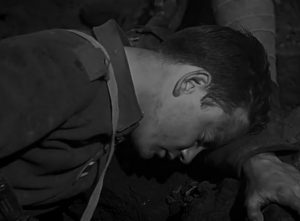 I wonder why I hated it so much back then, but I hated a lot of things for no good reason back then. (My early Amazon reviews are nearly all scathing, but I never deleted them because… well, it’s entertaining to see where I used to be.) 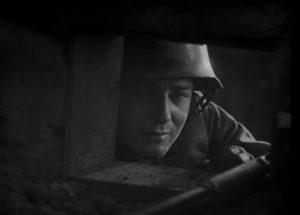 So anyway, more about the film itself. Considering this is just over a decade after the close of the war, we’re talking really recent history. They were closer to WWI then than we are to 9/11 today, to put it into perspective. It’s not unlikely that many of the people who produced this film were either in the war or knew people who had been. The battle scenes are gritty and surprisingly brutal, and I love Ayres’ performance. He’s naive and earnest, hardened and confused and despairing as needed, and he does them all very well.

It also is really refreshing to see the German perspective of things, which is not something that we really have much of. I feel like we tend to vilify the Germans as “the enemy” even today, but that’s not really fair. These weren’t Nazis. These are enlisted/conscripted boys fed into the war machine by their government and its propaganda. What these boys dealt with is the same plight as the boys on the Allied side dealt with.

WWI Films: The Road to Glory